Voluptas dolendi the gestures of Caravaggio – The show 2012

Voluptas dolendi: The gestures of Caravaggio was born from the meeting of two of the most prominent personalities in the panorama of ancient music and dance: Deda Cristina Colonna, dancer, actress and choreographer, and Mara Galassi, harpist. In Caravaggio’s painting, the gestures of an era survive without the mediation of the performance practice, the representation of the affections that were also expressed in music and in other arts. After a careful Caravaggesque observation, the two artists have drawn inspiration from a series of gestures that, understood in a rhetorical sense, link the images to the originals and to the pages of composers such as Monteverdi, Mayone, Trabaci, Laurencino. The show is a unique act for a dancer and harpist based on the suggestions and gestural rhetoric of Italian art between the fifteenth and seventeenth centuries. The public travels a journey parallel to the life of Caravaggio, illustrated not only by the relationship between movement and music, the recited texts and transformations. In Caravaggesque quotations, gestures become the words of music, expressing and affecting them. We do not speak strictly of “dance”, but – going beyond the lesson of the sources – of an accompaniment of the musical fabric through the movement in its various nuances, to the stasis. The recited texts are vintage testimonies taken from the proceedings of the processes suffered by Caravaggio, from the madrigals played by Monteverdi, from the first comments of the art historians. Voluptas dolendi: the gestures of Caravaggio is not an ancient dance show, although Deda Cristina Colonna dances a vigorous, an entry in the manner of Cesare Negri and the quotation from a famous Passacaille of Pécour; it is not a double harp recital, although during the entire duration of the show Mara Galassi performs the compositions of some of the most famous authors of the Cinque-e Seicento. With this show the authors wanted to start an artistic journey that takes advantage of the experience of the ancient repertoire as the starting point of shows intended for today’s public and its sensitivity. After the successful rendering produced by the Marco Fodella Foundation, the show is presented at the Monteverdi Festival of the Teatro Ponchielli of Cremona in a renewed theatrical role. 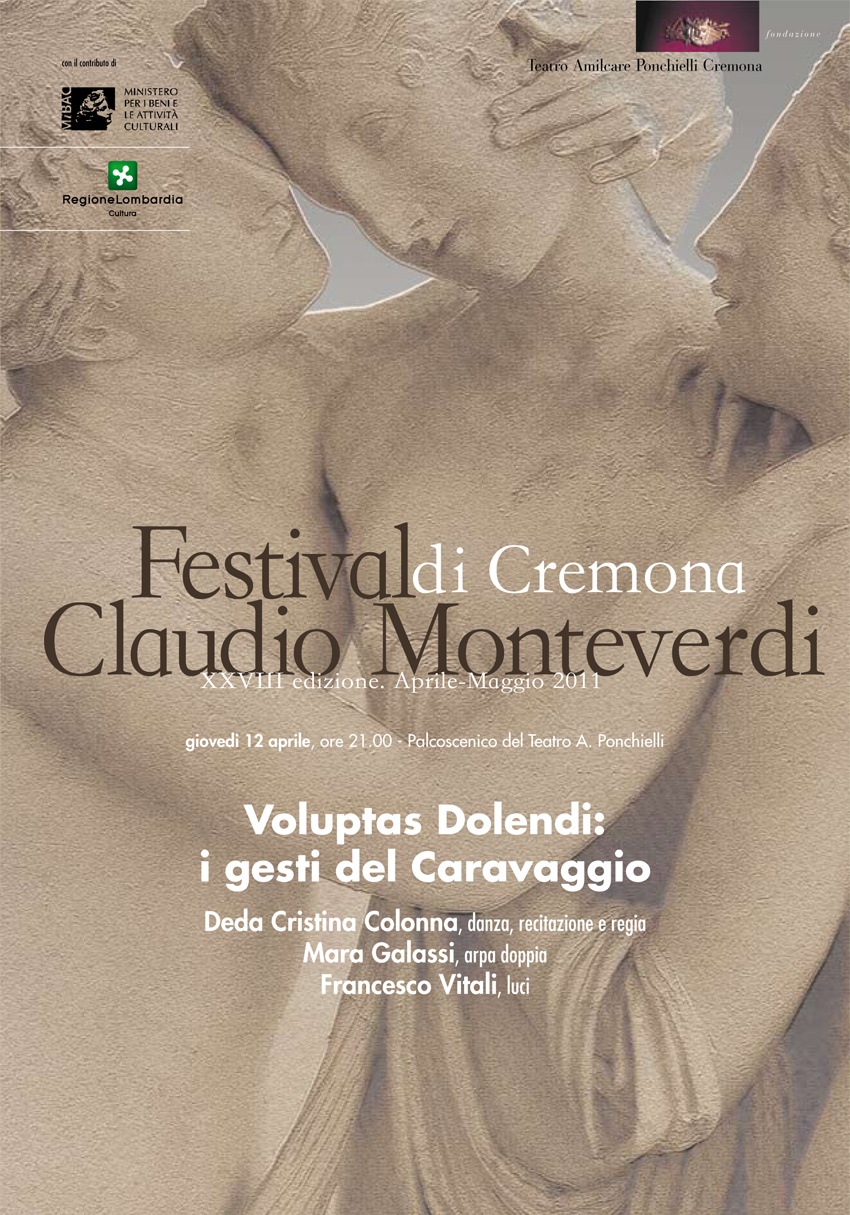 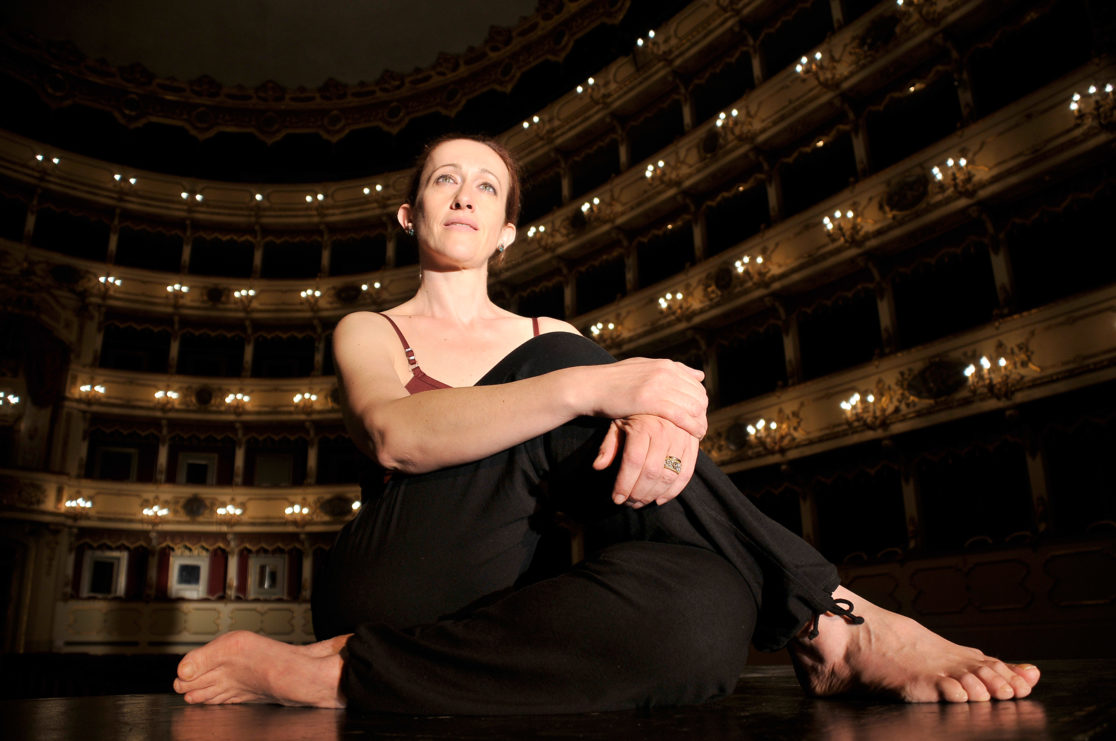 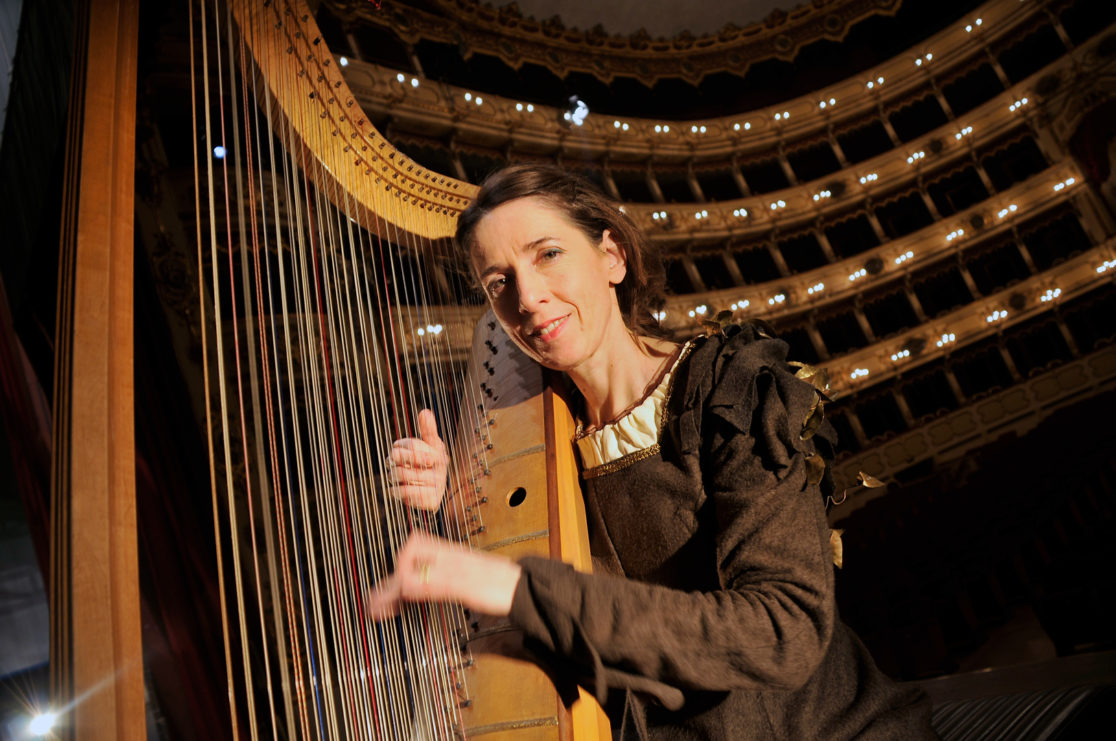 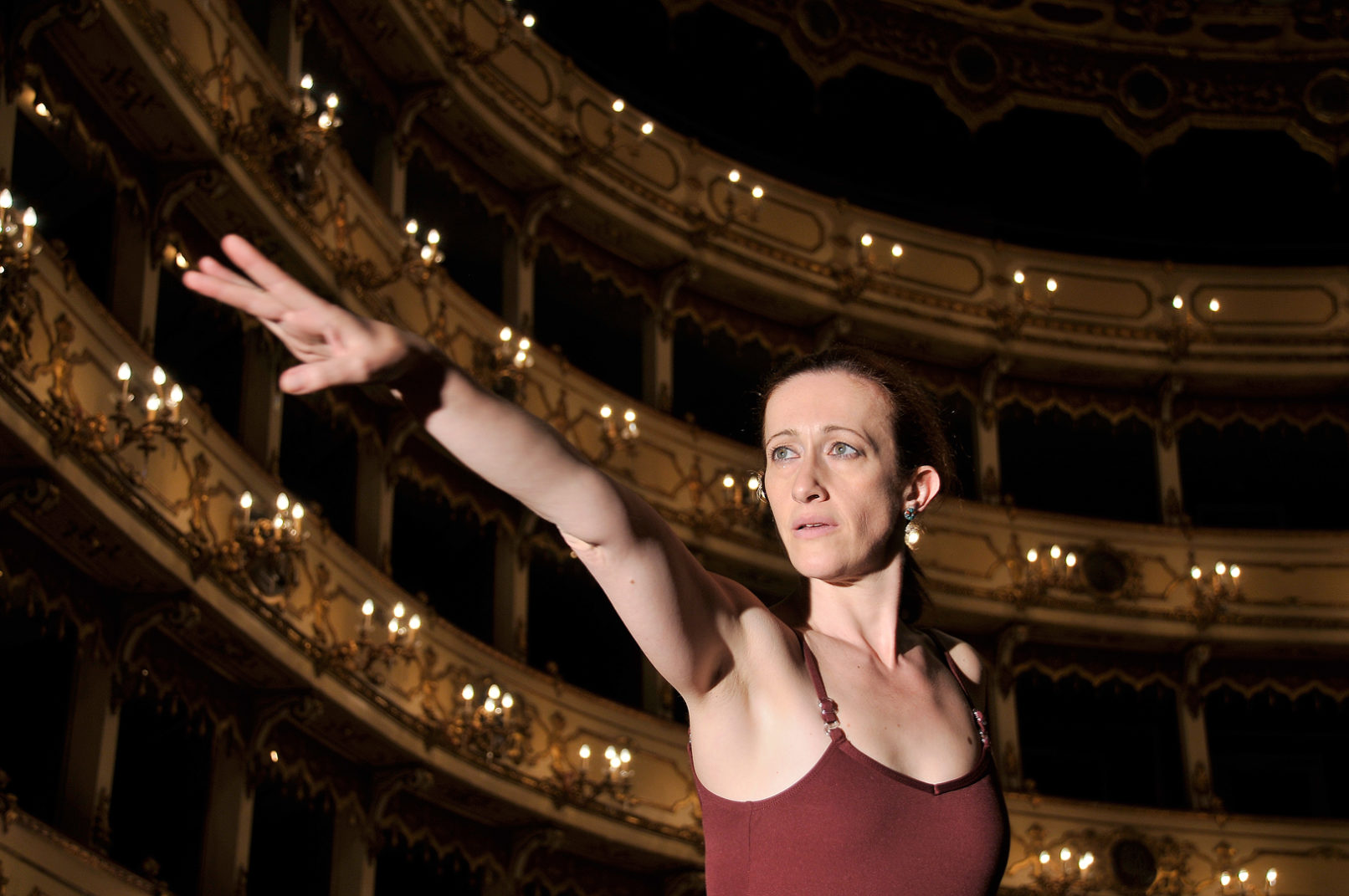 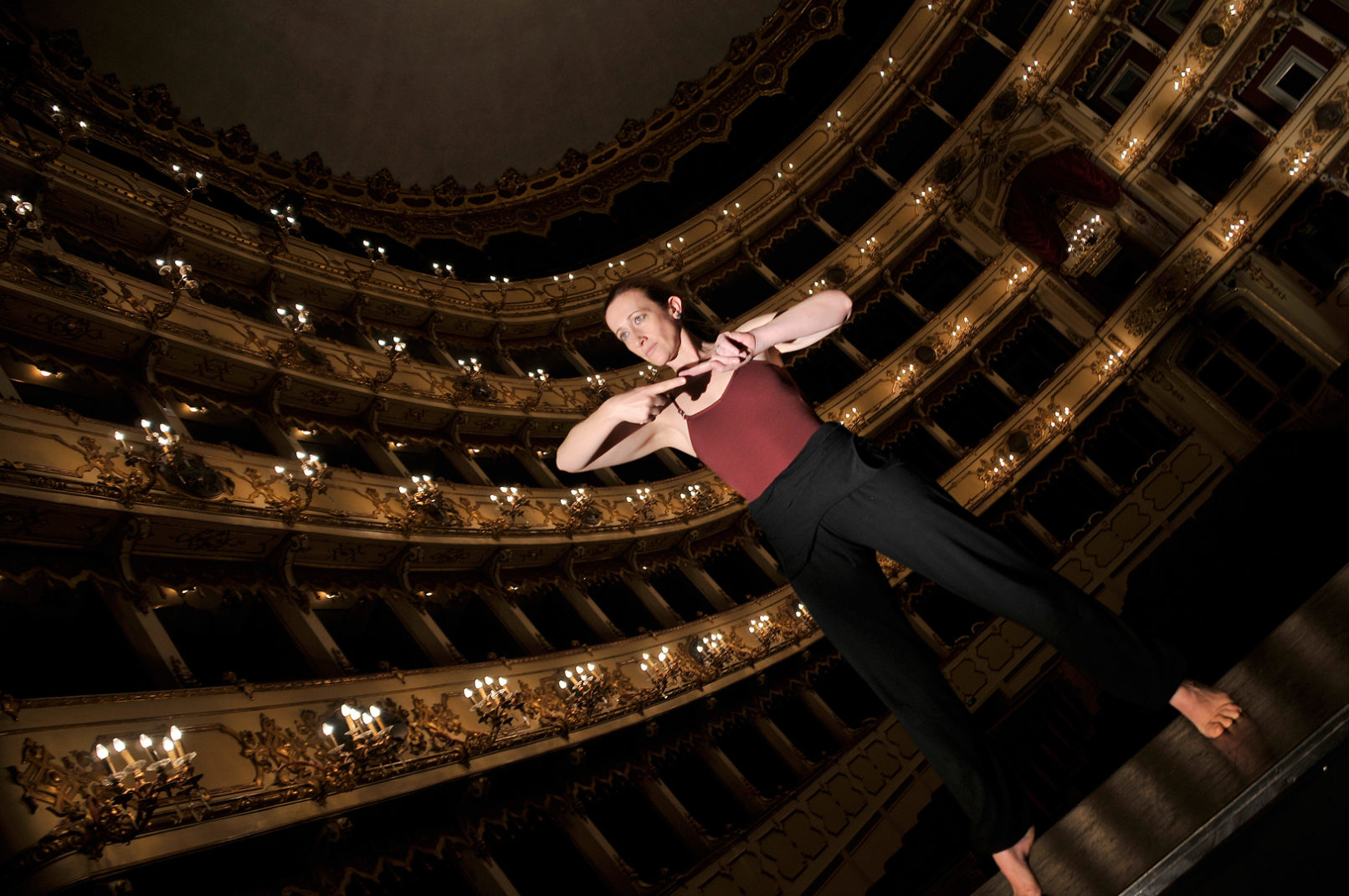 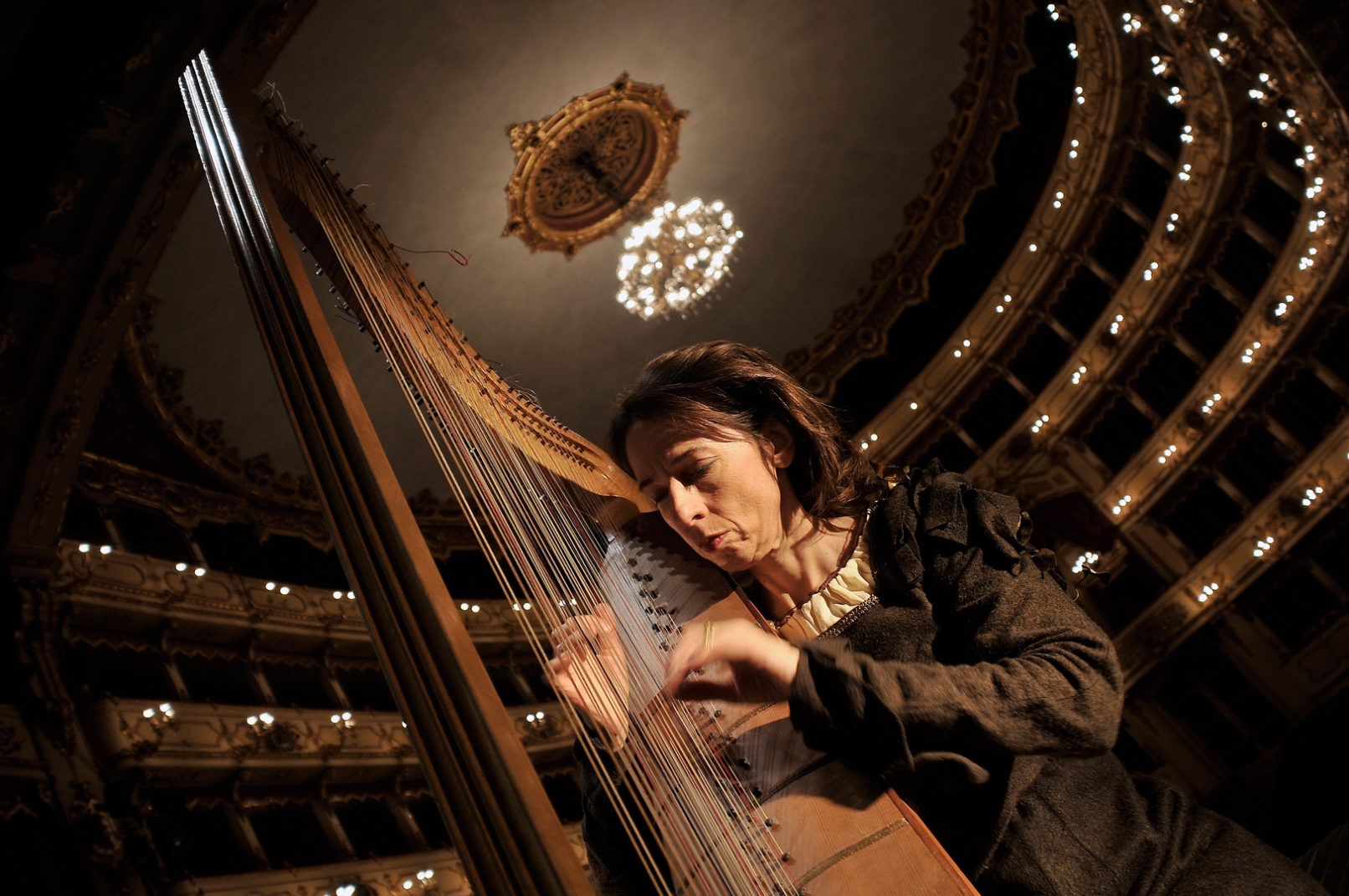 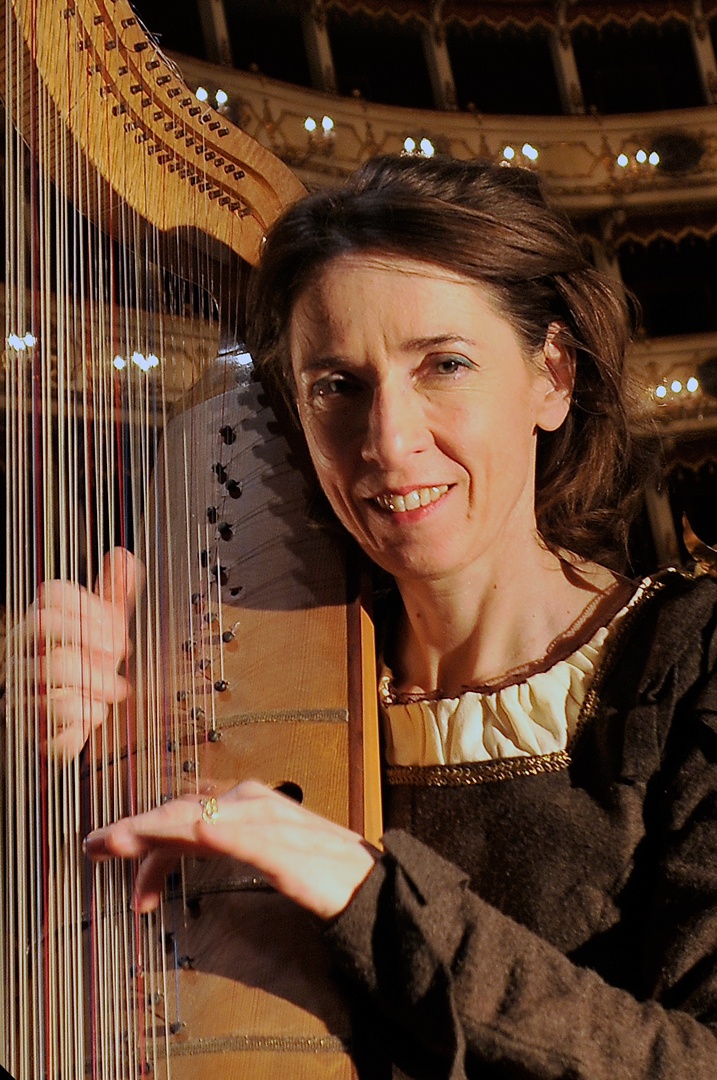