Voluptas dolendi the gestures of Caravaggio – The show 2006

Friday 27 and Saturday 28 January appointment at the Royal Palace
Voluptas Dolendi – The gestures of Caravaggio
A dance performance, ancient music and acting for a parallel between the life of Caravaggio and his works

On Friday 27 January, at 8.30 pm, and on Saturday 28 January, at 5.30 pm and at 8.30 pm, in the setting of Sala delle Cariatidi of Palazzo Reale, will be staged “Voluptas Dolendi – The gestures of Caravaggio “, a free admission show (subject to availability) produced and produced by the Culture Department and Palazzo Reale, as part of the” Caravaggio e l’Europa “exhibition. Organized by the Marco Fodella Foundation, the “evocative and original performance of dance, ancient music and acting – said Stefano Zecchi, Councilor for Culture – refers viewers to the parallel visions of the life and works of Caravaggio”, in a Baroque atmosphere and at the same time contemporary for the play of rhetorical figures and the staging of a story for ‘living’ images.
The show includes a unique act for a dancer and an exceptional harpist: Mara Galassi (double harp) and Deda Cristina Colonna (dance and acting). Costumes and props by Barbara Petrecca, scenic space, lights and projections by Francesco Vitali.

Musical notes and figures painted in the air by the movement of the body tie in a story ‘live and through images’, the real life episodes experienced by Caravaggio to brush strokes and to the strokes of colors on canvas.
Here are the festive and vigorous dances, like the pantomime in time of ‘galiarda’, typical baroque dance, which refers to the painting “The good fortune”, where the scene of the gypsy girl reading the hand of the young man and at the same time stealing ring, relives on the scene in all its atmosphere. From the brush to the sword, like “il baro”, a famous canvas now animated by the actress’s gestures that mimics the characters on stage until the final act of the duel, not painted in the painting, but actually lived by Caravaggio, tried as a murderer, imprisoned and escaped, in a crescendo of notes and musical gestures that well represent the soul of a rebel artist, long hunted and prey of the powerful, from the Roman nobility to the papacy.
A journey parallel to the life of Caravaggio through baroque mimic eloquence, where costumes, lights and scenic elements recreate the atmosphere and the vision in the eyes of the spectators of the era in which the Master lived. And where the music draws from the wide repertoire of the ‘500 and’ 600: from the songs of anonymous, including fantasies and vigor, to the expressions of Frescobaldi and Monteverdi, where the sounds recall paintings of sacred and profane, from the ” Magdalene in ecstasy “to the” Deposition of Christ “. An interweaving of Caravaggesque quotations that, as if by magic, through the light step of the dance and the touch of the harp strings, come to life on the scene, emerging from the canvas to enter life and eventually transform into other images. 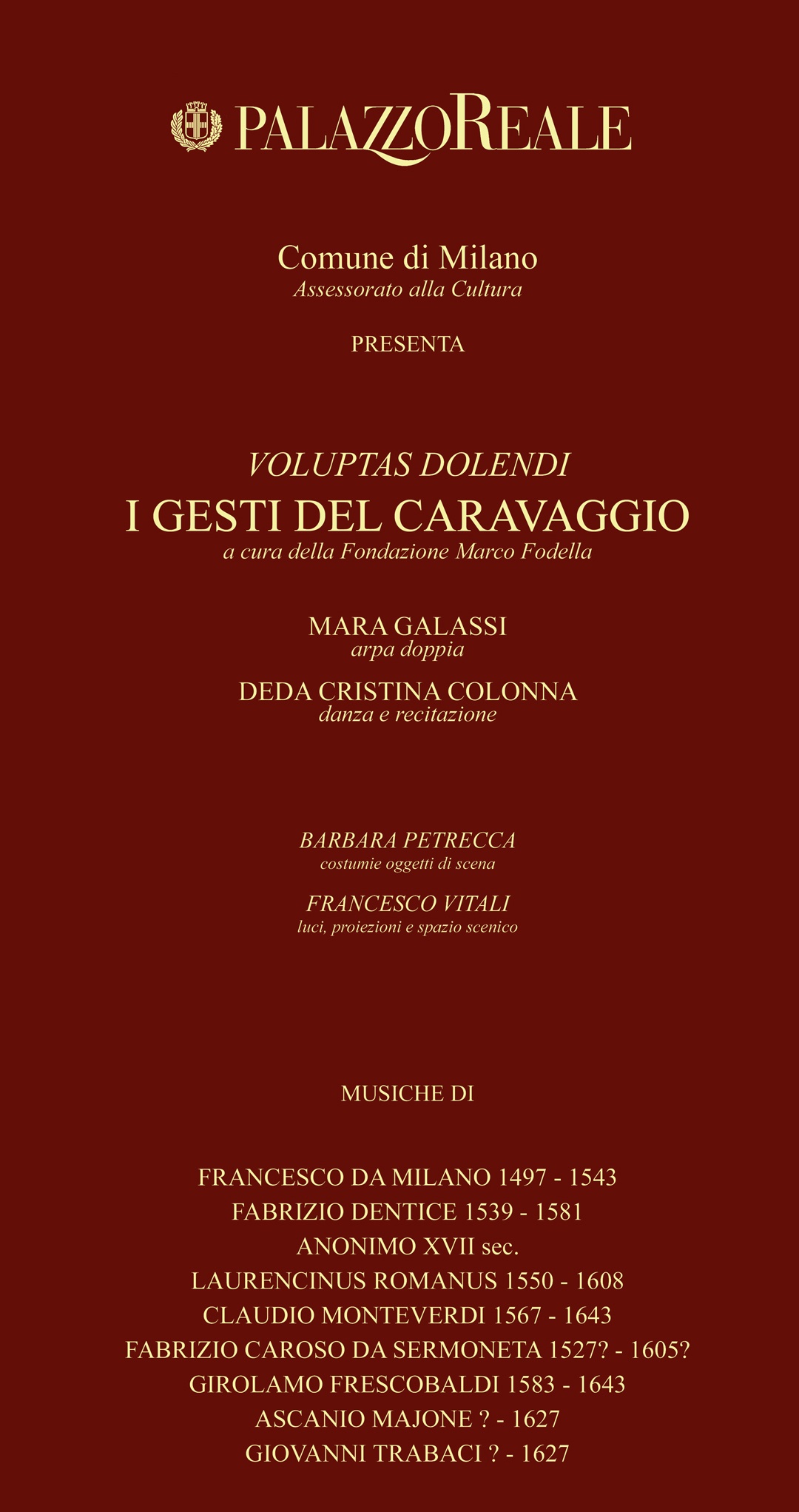